Constant debates on Hinduism and how it has evolved through the stages of time will always be a curious case for many. However, recent years have not been so calm for Hindus around the globe. Be it the recent attacks on them in South Africa, targeted persecution in Pakistan and Bangladesh or even selective decisions against them in their very own country, India. The latest book, and his debut, by Kumar Dipanshu, Next 5000 Years: Memoir of a Hindu without a Tag, however, doesn’t directly indulge in providing any account for such persecutions or presents any case for Hindus as such. Rather, the author tries to present the present situations where misplaced priorities and confusion in the ways of management might derail the whole grand effort of apprising the masses with the message that Hinduism brings and stands for. The book is based on personal experiences, observations and ideas.

The book is very apt in the given times because many leaders who have been advocating the pure and raw message of Hinduism have been old and the traditional approaches seldom work these days. In the age of digital media, digital infrastructure and awareness about the same are musts. The author tries to interpret the mediums, the means and also the exclusive ways that are displayed by some of the ‘key influencers’. The author writes:

“Time and again, we have been outraged and offended. Yet, we failed to embrace the art. The majority of the reactionary attempts have been limited to making memes!”

This book tries to put in perspective the recent ‘attacks’ on Hinduism and Hindus and the reaction to the same. For instance, the Oxford university bullying incident with Rashmi Samant, who was subjected to racial and religious slurs, finds its mention in the book and the author tries to recollect how this was not directly leading to a massive protest digitally and physically because some people did not find it worthy enough to be done. About time, management, the need of the hour and the ways, Kumar DIpanshu makes an important note in the same chapter from which an extract has been put above:

“People respond to content which appeals to their sensibilities on the surface within a fraction of seconds. And a significant part of the battle is either won or lost in those fractions of a second.”

The age in which Hindus are being subjected to racist, religious, bigoted and uncalled for attacks just for following their religion, one latest example is the picture of a NASA intern that attracted much abuse and battering, the author proposes for an inclusive, organised and well-prepared method for countering the same. For many centuries, and for many decades after the independence of India, a certain section of religious freedom, history, symbols and signs and anything associated with it have been suppressed, mispresented, deliberately ignored and subjected to controversies – the Ram Temple, the Ram Setu, the broken temples and the ill-written history… 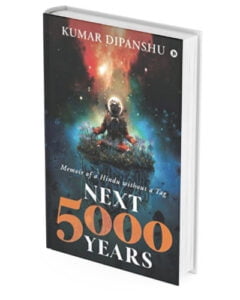 A book like the present one should give the responsible persons a brief moment of pause and rethinking. It will appeal to the sane minds and it will surely be an important step ahead for many. Though the book will certainly attract some cynicism from those who are spoken about in it, the message is clear and loud. You can get a copy from Amazon and read the book to understand more.

By Gaurav for Intellectual Reader